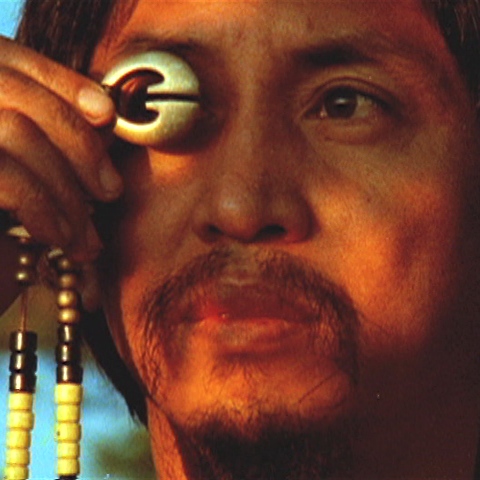 Kidlat Tahimik (b. 1942, Baguio City, The Philippines) is a pioneer of experimental film in Asia, practicing as a film director, writer, and actor. His films are commonly associated with the Third Cinema movement – a film movement begun in the 1960s-70s in Latin America that denounced neocolonialism, the capitalist system, and the Hollywood model of cinema as mere entertainment to make money. He is considered the Father of Philippine Independent Cinema, entering the international stage in the late 1970s with Perfumed Nightmare, a release enabled with the support of filmmakers Werner Herzog and Francis Ford Coppola.

Tahimik’s work embraces the essayist form. He is considered a magician of the fragment with an aesthetic often described as whimsical, politically incisive, and with a third-world self-consciousness.

MEMORIES OF OVERDEVELOPMENT REDUX I

Memories of Overdevelopment Redux I is an ongoing film project that began over 30 years ago. Shot initially on 16mm film, it imaginatively embellishes the true-life tale of Enrique, the Filipino slave of Portuguese explorer, Ferdinand Magellan (c.1480-1521) who was the first to circumnavigate the Earth. Bought in Malacca and taken to the Spanish court, Enrique becomes the favored object of Princess Isabella, their intimate liaison ultimately signing Enrique’s return to the Philippine islands. Tahimik’s voice shares Enrique’s ‘memories of overdevelopment’ as he returns to his hometown in The Philippines with his collection of European souvenirs.

Tahimik casts himself as Enrique, through a montage of analog and digital techniques of recording sound and image, where the set design and narration is a spontaneous assemblage of historical artifact, artistic prop, and anecdotal reflection. This short film splices the process of memory between the stage and everyday life, where Tahimik’s family often stands in for differing characters.

This short-film is a unique window onto indigenous Filipino life and belief, while also a clever and humorous provocation of History, where the colonized subject is with power to re-define and visualize his experience as a re-telling of the progress and value of Empire.

Memories of Overdevelopment Redux I, as it is shown here, is a stunning miniature tale that is ongoing and continues to be elaborated, extended and re-worked – such a process being a signature of Kidlat Tahimik’s oeuvre.