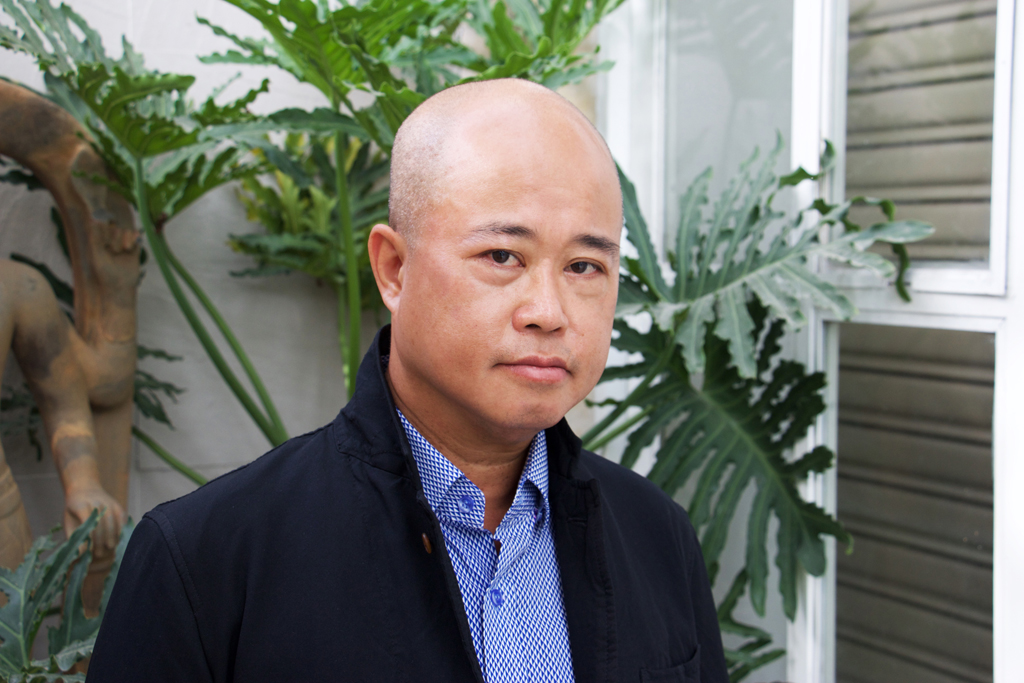 Dinh Q Lê (b. 1968, Ha Tien, Vietnam) possesses a diverse practice that is mindful of the complex interweaving of official and non-official histories, particularly in the minds of those who have undergone events whose facts are given little humanity. He is concerned with how history is recorded and institutionalized, how these archives fail in the telling of pain and loss, of the ensuing absence felt not only in the physical destruction of object and place, but also in the psychological battle of the exile, the refugee or the asylum seeker. Lê’s work challenges the digital age in its surplus of representational data, using his art to press pause on its minefield of images to force, expand, and reflect upon the significance of each individual image.

Lê received his BA in Art studio at UC Santa Barbara in 1989 and his MFA in Photography and Related Media at The School of Visual Arts in New York City in 1992. In 2007, Lê co-founded Sàn Art (alongside Tuan Andrew Nguyen, Phu Nam Thuc Ha, and Tiffany Chung). This non-profit art organization remains committed to furthering dialog, expertise, production and showcase of critical experimentations in contemporary art from Vietnam and abroad.

Dinh Q Lê is considered one of Vietnam’s most established artists whose practice has an extensive exhibition history worldwide. He lives and works in Ho Chi Minh City, Vietnam.

”Arts and culture also form a battlefield. And artists are the warriors in that battle. Like any other warriors, artists have specific responsibilities, namely: to serve the revolution, to serve the Nation, and to serve the people, here means the soldiers, the farmers, and the industrial workers […] Arts and culture, like any other activities, cannot separate from but must integrate into economics and politics.”

Those are the words of Ho Chi Minh in his letter to Vietnamese artists during the Fine Art Exhibition in 1951. Taking his advice to heart, many artists from different backgrounds entered the war to become soldiers on the field of culture and ideology. Using their pencils, colors, and artistic talent as weapons, they arduously recorded the war scenes: the battles, the artillery, and the everyday life of people in the war. Light and Belief takes us through a journey with narratives from senior artist-soldiers, beautifully embellished with their animated sketches from wartime to shed light on a difficult and haunting period of a country in transition towards independence.

Dinh Q Lê has delicately led the conversations with the seniors artists about their experiences witnessing the fate of the Vietnamese people who entered the war with determination and bravery. The artists shared with Lê their process of depicting life during battles (grieving and acknowledging the pain, but choosing to focus on positive scenes instead) and their sense of responsibilities in uplifting the spirit of soldiers (via both heartfelt conversations and propagandic arts). Most importantly, many artists expressed their anxiety about histories being lost as they grow older and their sketches deteriorate. To them, these war sketches are a way to document histories – the events and people that contributed to the liberation of Vietnam. Lê has blended scenes of the senior artists themselves becoming animated sketches in between interviews, to convey the message that the artists are history-weavers – a generation that silently contributed to their country. The story of Le Duy Ung, the volunteer artist who was blinded while recording sketches on battles, reverberates through the film as a testimony to the artists’ sacrifices.

Light and Belief is a documentary of a chapter in Vietnamese art history– where arts intertwine with socio-political and historical happenings to tell the story of a nation and its people, who have suffered but still stand firmly to hope and reach towards a better future. 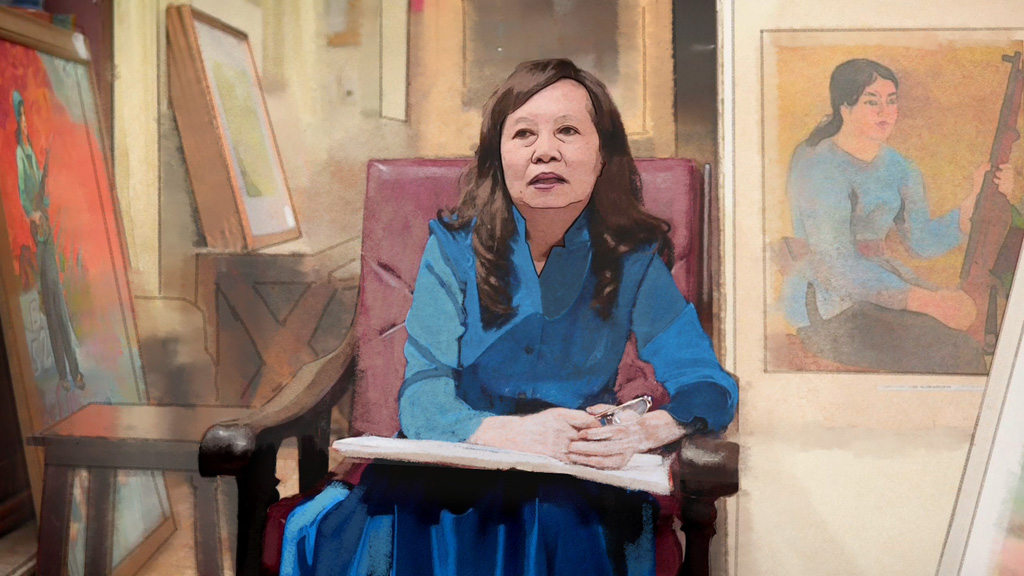 Vision in Darkness reveals the life and work of Vietnamese artist, Tran Trung Tin (1933-2008), a short-film that begins with Tran’s bold public announcement from the Hanoi Film Studio in 1975, via telegram, ‘I withdraw from the state official workforce. I withdraw from the Communist Party’. Born in Saigon along the Mekong Delta, Tran’s unique life journey traverses his trials and tribulations as soldier, actor, Communist Party Secretary, and artist, whose movement from South to North Vietnam (and back) was deeply and traumatically colored by firstly his passion, disillusion, and eventual resignation with and from the Communist cause.

As director, Dinh Q Lê interviews several individuals in this documentary – intellectuals, fellow colleagues from the film industry, art historians, and Tran Trung Tin’s widow – who reveal Tran as a character of principle, who was not only socially ostracized from family and friends for his disavowal of Vietnam’s dominating political ideology, but also was never accepted as an artist by his artistic community due to his revelry in abstraction (an experimentation they blamed on his lack of a formal art education).

Throughout this short film, Lê interweaves images of Tran’s art – painted abstractions often on newspaper – these heavy gestural works suggestive of human figures in torment where bold swathes of color emotively reveal the medium as Tran’s only freedom of expression. During Tran’s era, the official art establishment of Vietnam did not permit experimentation in abstraction or nudity, instead demanding that artists follow ‘social realist’ motivation and technique to serve the country’s propaganda machine. It was Tran’s frustration with this control of artistic expression and production, its lack of truth in reflecting the dilemma’s of the Vietnamese people, that emboldened his immersion in abstraction – a practice today arguably finally recognized as an influential precursor to the growth of conceptual experimentation in Vietnamese post-war painting. 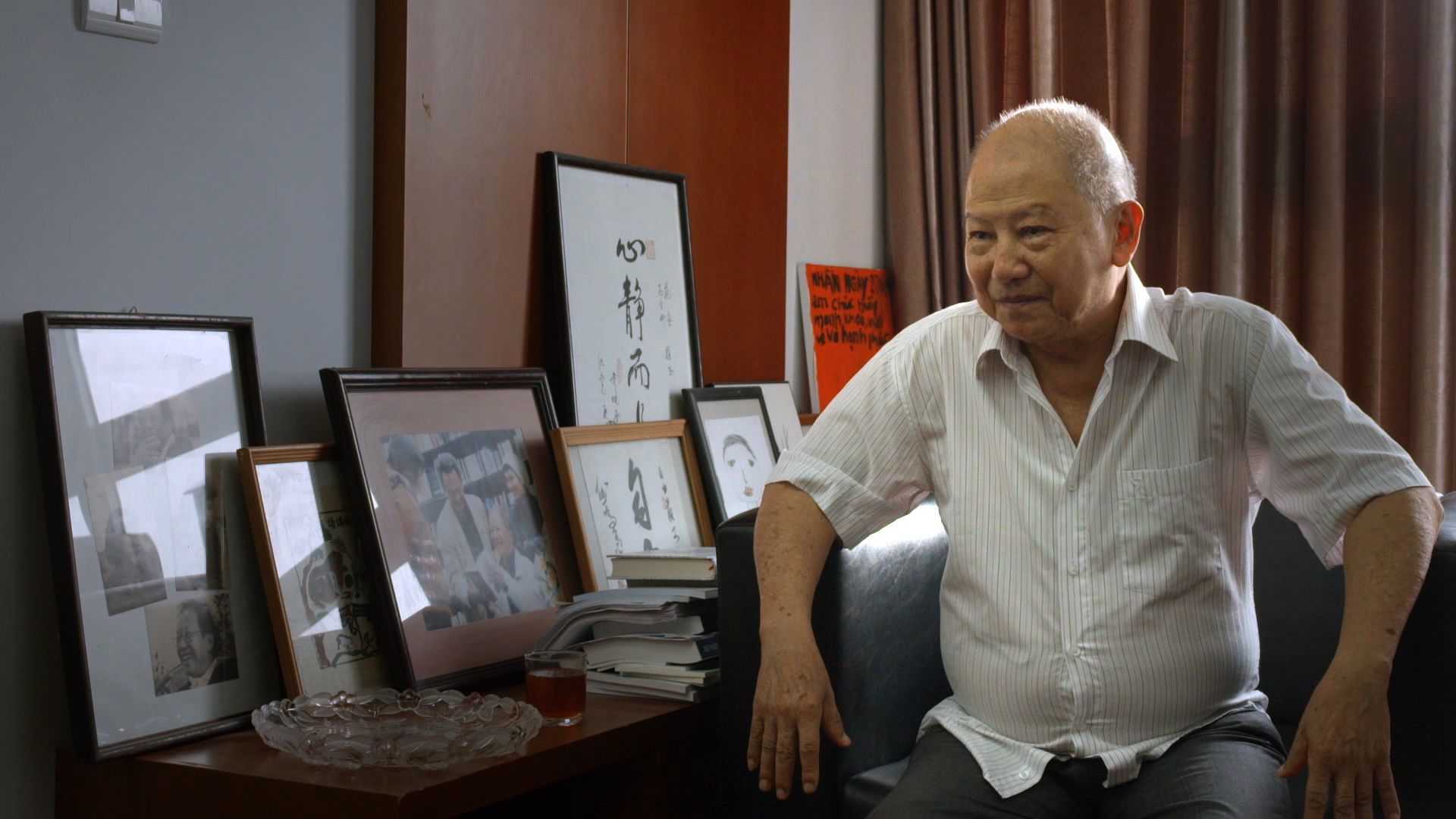